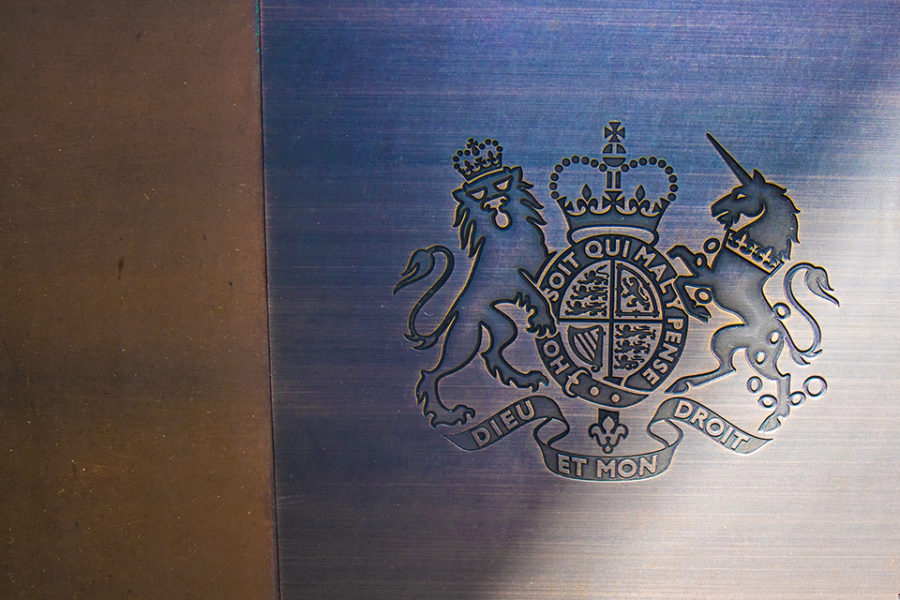 This blog article is republished without any modification from https://blogs.fcdo.gov.uk/author/leighturner/ by courtesy of the author.

“My boy is back. Thanks for all the hard work that helped make this happen!” The tweet sent late morning on 4 April 2020 shows two happy faces. Father and son reunited again in the UK. It was a positive ending of a weeks-long operation by British Embassy Vienna staff, evacuating 391 young British ski workers, trapped in quarantined areas of Tyrol following the first COVID lockdown in Austria in spring 2020. This kind of support (which I have blogged about in more detail here) is a good example of one of the key functions of an Embassy and a central mission of the Foreign, Commonwealth and Development Office: protect our people. 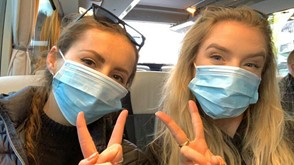 It’s not every day that planes and buses are chartered to get hundreds of people home safely during a pandemic.

But we do regularly provide support to British Nationals. Whether it’s hospital or prison visits, issuing emergency travel documents or providing the “certificate of no impediment” Brits need to get married abroad – our consular team are constantly busy looking after the roughly one million British citizens who visit Austria every (non-pandemic) year, and looking out for the interests of 12,000 British nationals who live in Austria.

While most visiting and resident Brits happily live their lives without needing to contact the Embassy, in the event of a crisis our consular staff can serve as a link, liaising between British Nationals or their next of kin and local authorities such as doctors, social workers, social security officials or, in the tragic cases which inevitably occur occasionally among the large numbers of UK visitors to Austria – undertakers who can help to repatriate the deceased.

One of the many busy times of the year is the annual “Snowbombing” festival, a music festival in the Tyrolean mountains in April, popular especially with young Brits. Working with the organisers, our consular team has been able to reduce the number of consular issues there by using social media to highlight preventative measures and remind people that they should, for example, always get travel insurance before going on holiday. 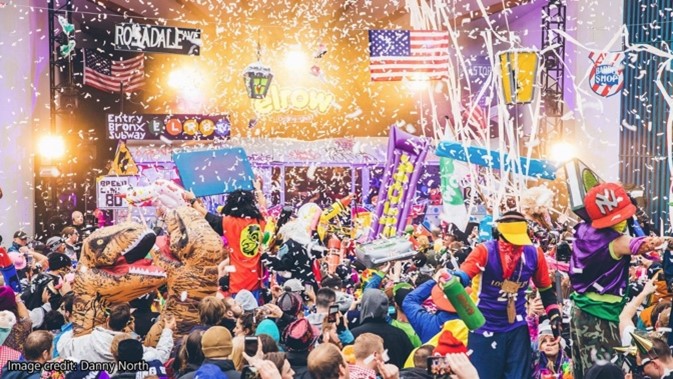 There are of course limits to what our consular team can help with. They can’t, for example, provide tax or legal advice, find work or accommodation, investigate crimes or get involved in private business issues.

Since January 2020, one of the key priorities of our consular and political teams has been implementing the provisions of the Brexit Withdrawal Agreement, whereby the UK left the EU on 31 January 2020. All Brits who were legally resident in Austria before 31 December 2020 have the right to continue to live and work in Austria. In order to do that they all need to apply for a new residence permit, the Article 50 card. Before applications opened at the start of the year, Embassy colleagues worked closely with the Austrian government to try and ensure the process was as open, transparent and fair as possible. That included lengthening the application period from six to twelve months, and ensuring that key information was available in English.

We are grateful to our colleagues in the Austrian Interior Ministry, and in the different provinces of Austria including MA35 in Vienna, for their co-operation. 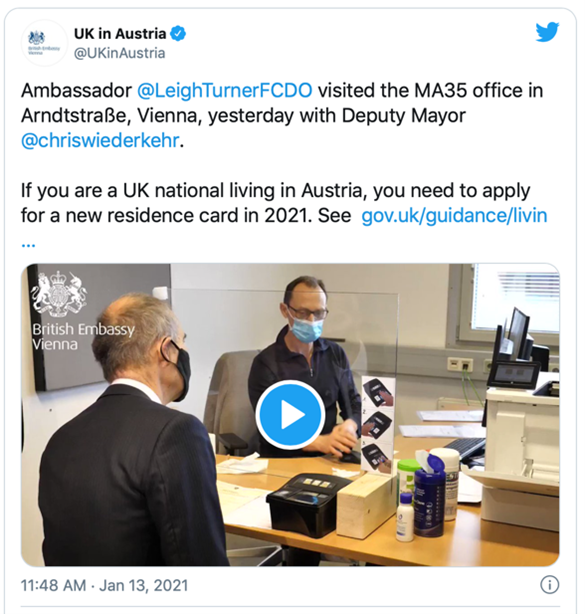 I was also able personally to congratulate the first Brit who received her Article 50 card in Vienna: 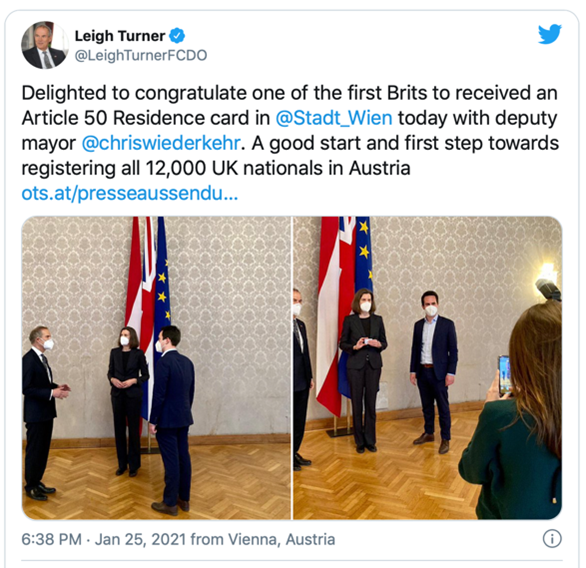 We are in regular contact with the Austrian authorities to ensure that, if Brits in Austria report to us issues relating to their rights under the Withdrawal Agreement, the ministries are aware and can take appropriate action. You can report issues here.

In the last couple of years, together with Austrian experts, I and members of the Embassy team travelled to all parts of Austria to hold meetings with Brits from Bregenz to Eisenstadt and inform them about the EU exit negotiations and how they should get ready for continuing their lives in Austria. I personally met around 4,000 Brits during that time. It was great to meet so many people originally from the UK who were living in Austria. They included former ski instructors who had settled in Tyrol, automotive engineers in Styria, pensioners in Carinthia, Researchers in Lower Austria and Students in Vienna. 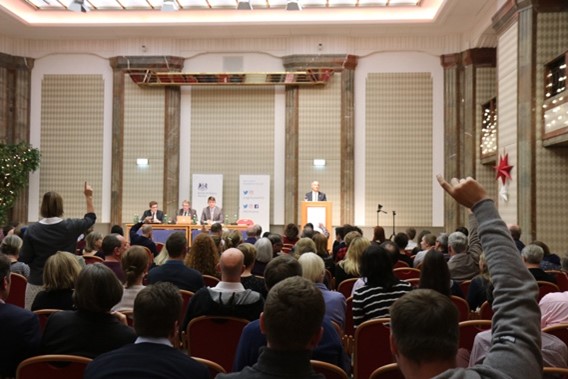 This diversity of Brits in Austria is great and we continue to be ready to provide support when they need it. To quote Vienna’s Deputy Mayor Wiederkehr, who is responsible for integration and education in the Austrian capital: “All Brits who live in Vienna are an important part of the city and we want as many of them as possible to stay here.”

The Austro-British Society is looking forward to your views and comments! 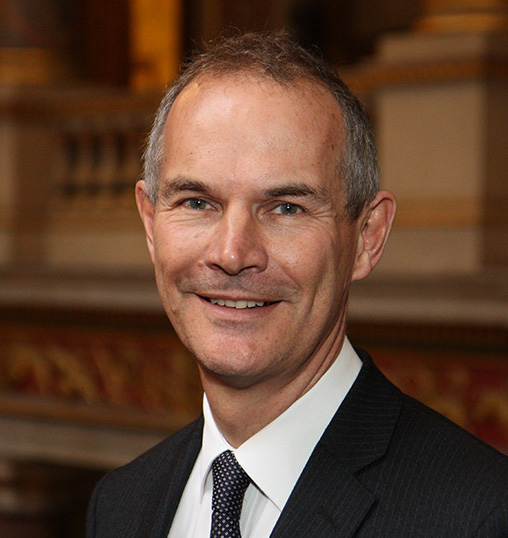 H.E. Ambassador Leigh Turner is Her Majesty’s Ambassador of the United Kingdom to Austria, UK Permanent Representative to the United Nations and other International Organisations in Vienna and is Honorary President of the Austro-British Society since his assignment started in 2016. He grew up in Nigeria, Exeter, Lesotho and Swaziland. After Grammar School in Manchester, he attended Downing College, University of Cambridge, from 1976 to 1979. He then worked in the Department for Transport and the Department of the Environment, and from 1983 he worked for the Foreign Office in Vienna (1984 to 1987), Moscow (1992 to 1995) and Berlin (1998 to 2002), among other places. From 2006 he was Director of Overseas Territories in London, and in 2008 he became Ambassador of the British Embassy in Ukraine. As of 2012, he was British Consul General in Istanbul, prior his move to Austria.

The opinions expressed in this article are entirely his and reflect in no way the opinions of the ABS.