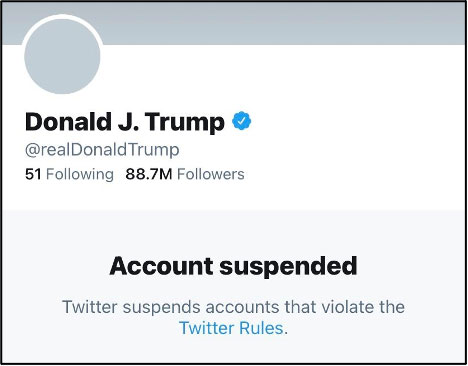 Opportunity or threat for Democratic processes?

When the picture above appeared, some might have thought: It comes four years too late – but better now than never.

The delete button has not even been fully released when a discussion was initialised, including some serious questions: Is it right for a company to decide who is allowed to make tweets or not and which political view is acceptable? Does the suspension of President Trump's Twitter account represent a limitation of freedom of opinion, which is one of the fundamental human rights? Does the suspension of a politician's account with some 88.7 million followers represent an unlawful political interference?

Let us take the reason for Mr Trump's Twitter account deletion into consideration. Just a few days before, on January 6th, 2021, the Congress was requested to confirm the US election result, which saw Mr Biden as the winner and President-Elect. And so, it happened. Mr Trump, absolutely convinced that the correct election result might have looked different if there had not been "irregularities" and the "biggest betrayal in US history", – for which he failed to give any hard evidence so far – called his supporters not to accept the Congress' decision and to fight against it. The result was a riot on January 7th, 2021, where some hundred protesters and Trump fans smashed the Capitol doors and vandalised the famous governmental building in Washington DC. The riot has been commented throughout the world as an "unseen attack on democratic values" and has understandably damaged the US reputation. As a result of the events, Twitter decided to suspend President Trump's account as his tweets "violate the Twitter rules".

Unquestionably Mr Trump's active social media role has changed the political game. While his predecessor Barack Obama used Social media to cultivate his image, Mr Trump actively made politics with his tweets, which generated worldwide attention. Through the changing and ever-increasing importance of Social media, this sector has become a relevant factor of influence in the political decision-making process and only by now, the broader public and officials are forced to decide, how to deal with it.

Basically, there are two big groups with different arguments:

Finally, there are official opinions around:

Some might say: Taking all this into account, it is evident that the legislation failed and is now forced to provide a legal framework, with which Social media platforms can evaluate published contents and therefore need to be provided with a sound legal basis on which to operate. But is it really up to the state to decide which political views are "allowed" or "banned"? Where are the limits of this approach? Let us look at China's standard practice where journalists expressing criticism about the political system "disappear" all of a sudden or are interrogated. One example is the reports of a journalist using the name "serpentza" on YouTube. He explains the situation of government media control on his channel, e.g. in the video "I was interrogated and detained by Chinese Special Police". Or think about the blogger Zhang Zhan who faces five years in jail for her Wuhan reports in the context of the Covid19 situation in China (source: asiannews.it)

Though it is a problematic issue, we all as a media society have to deal with it. Unfortunately, media politics still is not a relevant argument in pre-election campaigns, but this might soon change. I am personally convinced, that events like the Capitol riot or the currently challenging role of the media in the Covid19 crisis will lead to the point, where the general public will ask politicians specifically about their opinions about media control and media politics before giving them their vote in future.
Let us have your thoughts and comments!
We are looking forward to receiving them!

Jochen Ressel is a Board Member of the Austro-British Society and takes responsibility for the ABS’ Social Media channels. He worked several years for a UK company and its HQ in London and has held management positions with responsibility for corporate communications in the last decades and now, as the COO of SoccerCoin. The views expressed in this article are entirely his and reflect in no way the opinions of the ABS.

0 #2 RE: Social Media Oligarchy — Shogun 2021-02-16 13:23
"My freedom ends where yours begins".
“Congress shall make no law respecting an establishment of religion or prohibiting the free exercise thereof; or abridging the freedom of speech, or of the press; or the right of the people peaceably to assemble, and to petition the Government for a redress of grievances.”
The issue with arguing that social media is incitement is that, while a social media post may advocate for an immediate lawless action, the post would not be considered incitement unless it also was likely to produce such an action. Social media posts can reach a diverse group of people, some angry and motivated to take action and some who are not. In this respect, individuals who are physically present have the ability to immediately take action in response to the speech, whereas viewers of social media arguably do not.
That sounds fair, but what about a person in authority who posts such incitements? That is the question.

We all cry foul when non democratic govts. switch off social media as the people start to rise up against them. So one would imagine the outcry here should be the same. Maybe the moral difference is they were fightiing for democracy and he (Trump) is fighting against it and with this tweets and recent behaviour has incited people to behave in a manner that has caused harm and even death to others, but not for reasons of freedom. His tweets have insighted people to try to hurt the very foundations of the US Democracy, to storm the capital when elected politicians were in session to do the people's business. He did not apologise for it afterwards. In fact more than that he said even more inflammatory words in some of his tweets.

Because of this I am happy to have the words of one man shut up on social media.
Zitieren
Kommentarliste aktualisieren
Alle Kommentare dieses Beitrages als RSS-Feed.