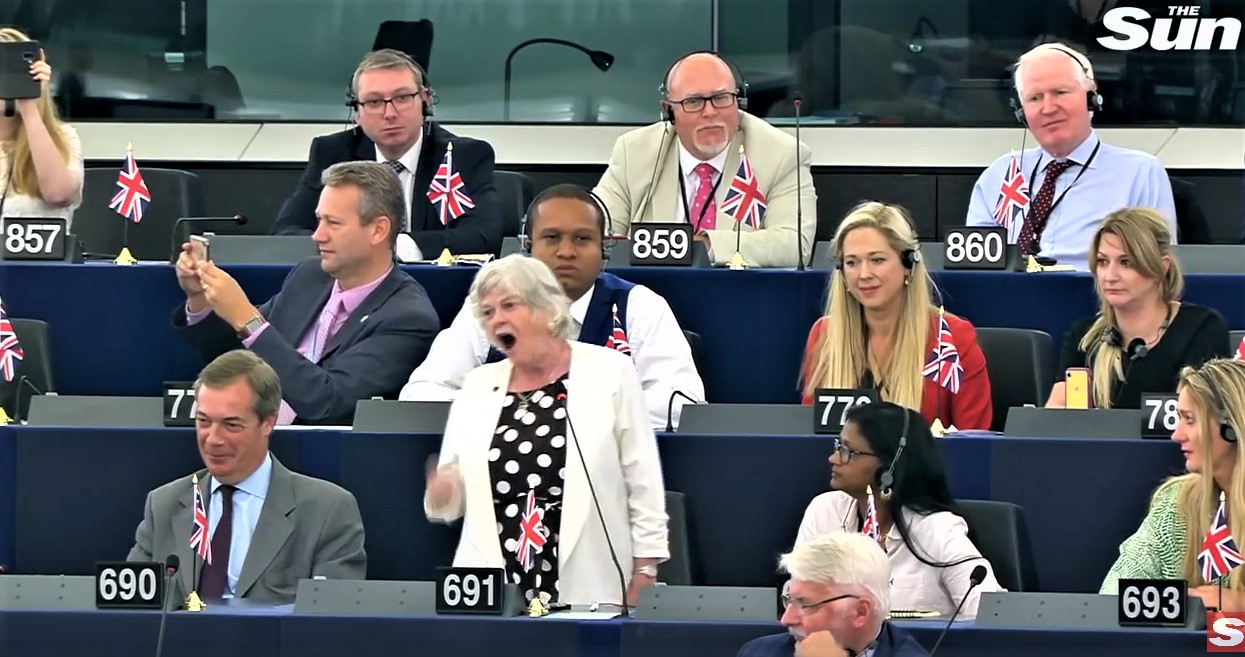 Boris Johnson says: “we need to restore the clapper, in order to bong Big Ben on Brexit night and that is expensive.”

“The bongs cost £500.000 … but we are working on a plan so that people can bung a bob for a Big Ben bong” “Bung a bob” is a rather puerile English slang for “give me a shilling (a “bob” today 5 pence) so I can make Big Ben chime!” Well, we know that “Big Ben” is under repair like many things are in Britain. We also know that Britain’s Prime Minister Boris Johnson enthused to have “Big Ben Bonging” at 11 pm Greenwich Meantime (our 12 Midnight Central European Time) thus celebrating Britannia’s exit on 31 January 2020 from the European Union, which Anne Widdecombe, former Tory MP and new MEP for the Brexit Party, likened to slave masters.

In an unprecedented hateful rant in the European Parliament she recently spat: “There is a pattern consistent throughout history of oppressed people turning on the oppressors- slaves against their owners, the peasantry against the feudal barons, colonies…against their empires, and that is why Britain is leaving. And it doesn’t matter which language you use - we are going and we are glad to be going. Nous allons. Wir gehen. We’re off!”

Meanwhile, Labour MP Dr Rosena Allin - Khan tweeted: “It is disgusting that Anne Widdecombe would reference slavery and colonisation to describe our relationship with the EU. Her (sic) and Farage are bankrolled by elites - she’s part of the establishment which has created such a divide in this country.”

Well, there certainly is a pattern. Did not Boris Johnson call the French “turds” (lumps of excrement), something that isn’t cricket, chaps? I know and let me tell you again that the love affair of the British with Europe goes as deep as that of a child with a plate of spinach. Both are told it’s good for them but both hate it.

It cannot therefore be a coincidence that in these tumultuous days of Brexit madness, lasting already more than three long and awful years a plethora of British patriotic movies has reached the big and the small screen. British obsession with the war, be it number One or number Two, has reached fever pitch, and Johnson morphs progressively into a second edition of Winston Churchill, if only in stature but not in grandeur.

The enemy has always been out there in Europe: the French, the Spanish, the Germans and the rest of us other (Central) Europeans blissfully ignored by the British hidden by an impenetrable veil of utter ignorance.

Brexit has become a little bit strange. What is currently happening across the English Channel reminds me a bit what is happening across the wider expanse of the Atlantic Ocean, the United States of America. A redneck from the South, clearly a Trump supporter, sporting the red cap emblazoned with the slogan “Make America Great Again” challenged on camera the “liberals” (Democrats) to knock it off his head. He needs the exercise, he barked. He wants to beat the living daylight out of that damn liberal, who dared to take his cap, beat him so hard that, when after three weeks in hospital in a coma, he will wake up as a Republican.

This kind of exhortation seems to be prevalent not only on one side of the big pond, namely the United States of America but also on this side, namely the United Kingdom. What is it that makes these two societies so prone to violence, so hateful, so horrifically xenophobic and so divided? Is it the political system?

+1 #1 Brexit Party — Steve Read 2020-01-29 17:45
BREXIT is like a nightmare that you cannot wake up from - .an Ego based Mystery Tour to unknown places in a coach steered by a driver with no driving license, map, or SatNav of where in the World the UK is being taken. The Promised Land offered doesn't exist and never did. Widdecombe: unfortunately as Euthanasia is illegal in Britain, we must all just wait for a Divine Intervention to help us out. The Brexit Party is NOT actually a Political Party - it is actually a British Limited COMPANY with Farage in sole control; and that raises issues of 'accountability and spending accountability' . Brexit is not about the British People voting to leave the EU - it is about 17.4 million of the 66 Million British citizens wanting to leave after constant, proven lies and illegal funding of the Leave campaign.... So as the dreaded 31st January approaches all too rapidly, I am inclined to voice my thoughts as being "God Save the Queen - and God Help Britain"
Zitieren
Kommentarliste aktualisieren
Alle Kommentare dieses Beitrages als RSS-Feed.